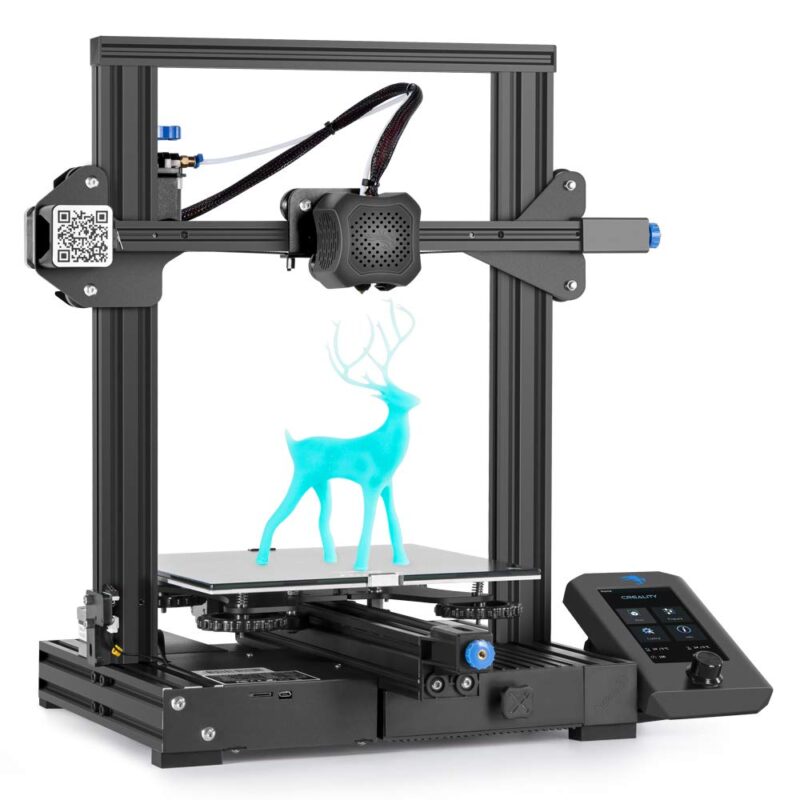 In this Creality Ender-3 V2 review, you will find out all about the advantages and disadvantages of this 3D printer. I will also compare it to its main competitors in the 3D printing market. If you’re looking for a high-quality 3D printer that comes at an affordable price, don’t miss the opportunity to read this review. By the end of it, hopefully, you’ll be able to decide if the Creality Ender-3 V2 is a good fit for you.

Launched in 2020, the Creality Ender-3 V2 is an excellent upgrade to its predecessor, the popular Ender-3. This 3D printer uses fused deposition modelling (FDM) technology, which is the most common 3D printing method for consumer printers. By extruding molten plastic filament through a nozzle onto a platform, FDM 3D printers build up layers to create a model.

The Creality Ender-3 V2 is a semi-assembled 3D printer, so it’s easy to set up. This is important if you are new to the 3D printing world. Most importantly, it has a large build volume and generates high-quality outputs. 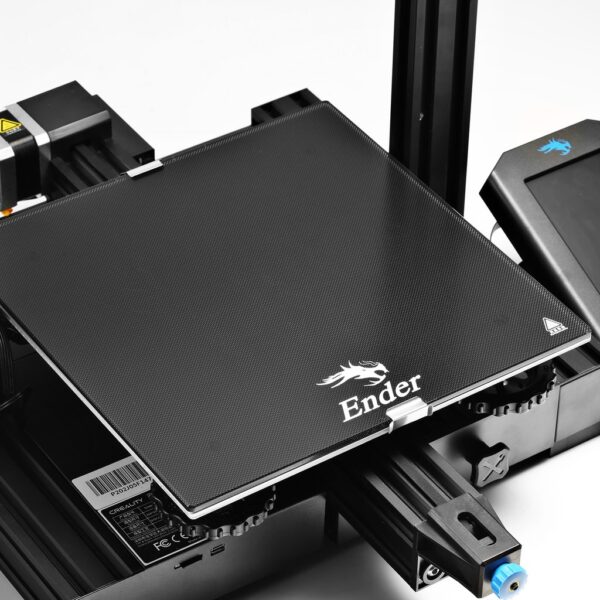 The Ender-3 V2 is a classic open-frame 3D printer, similar to the Prusa i3 and AnyCubic Vyper. The printer’s base has a built-in tool drawer to store the wrenches, cleaning needles, and Allen keys that are included with it. On the back of the 3D printer base, there is an on/off switch and a voltage switch that can be adjusted at either 115 or 230 volts, depending on your location.

The Creality Ender V2 has many valuable features, considering it is a budget printer. Below are the most important ones.

All popular 3D printers feature auto bed levelling. However, this is not common for low-budget 3D printers. They usually stick with manual bed levelling, which is also the case with Creality Ender-3 V2.

Here are the signs you should level the print bed:

This printer comes with a self-developed silent 32-bit motherboard with a 2560 chipset. This feature reduces the printer’s noise level to an astounding 50 decibels.

Creality Ender-3 V2 features a newly developed colour display that improves user experience. While most low-cost printers feature a cheap LCD screen, this is not the case with Ender-3 V2. Still, even though it resembles a touch screen, V2’s colour screen is navigated through a click-wheel.

The carborundum glass platform helps the hotbed heat up faster and allows for improved print adhesion. Even on the first layer, it allows for ultra smoothness.

This perk was first introduced by the Prusa i3 MK3 3D printer. The resume print feature allows the Ender-3 V2 to resume printing even after sudden power outages or disconnections.

Setting up the Creality Ender-3 V2 is fast and easy — just follow the instructions in the manual. Some components, including the power supply and motherboard, come pre-assembled. However, the filament holder, display, Z-axes, X-axis with extruder/printhead, and wiring must all be assembled manually. 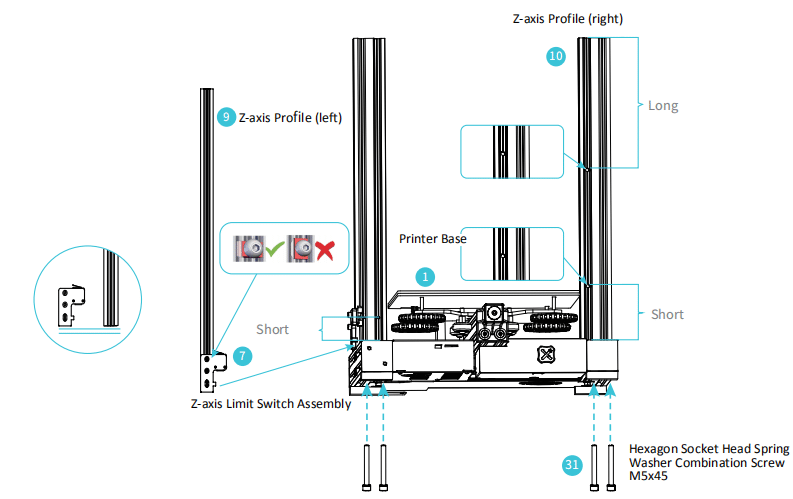 When it comes to the print quality of the Creality Ender-3 V2, it is excellent. Moreover, this 3D printer can print at a speed of up to 150 mm/s. The layer thickness is between 0.1 and 0.4 millimetres. 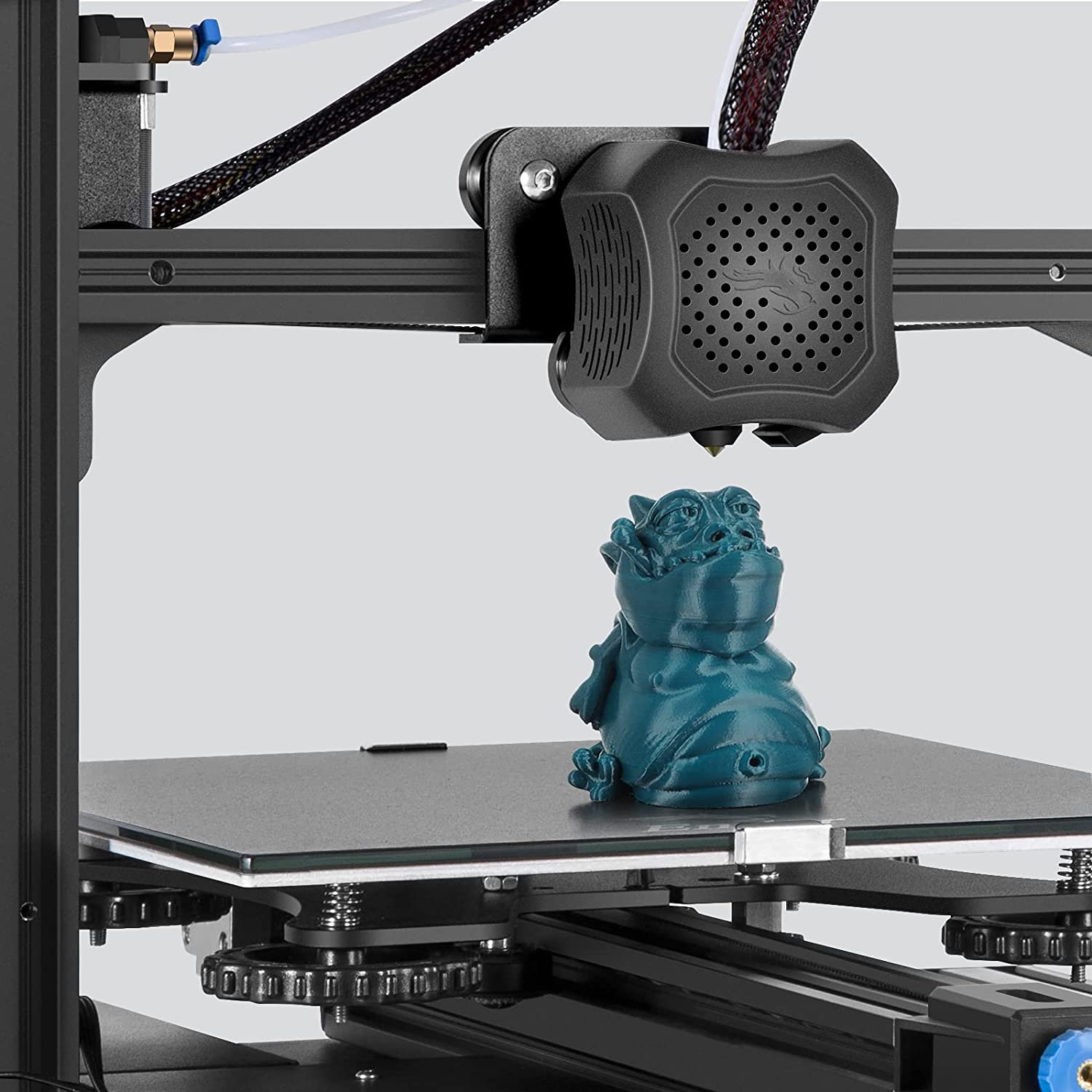 The Ender-3 Pro uses its own 3D printing software, the Creality Slicer. The software is included with all Creality 3D printers. Since Creality Slicer is based on Cura and appears to be almost identical to it at first glance, it is easy to use for anyone who is already familiar with Cura.

Just like Cura, the Creality Slicer has a Marketplace where you can download plugins for a variety of apps and third-party software.

If you have any questions or problems with your Creality Ender-3 V2 3D printer, you can contact the customer support team for help. They are available 24/7 and are happy to assist you. You can reach them by phone, email (sale@creality3dofficial.com), or live chat.

Note: Make sure to attach a picture or video of the issue you encountered, as well as the manufacture barcode located on the printer base.

After thoroughly analyzing this printer’s advantages, disadvantages, main features, and more, it’s time to look at its key competitors.

However, the most important difference between these two 3D printers is the print bed. While the Pro version has a detachable magnetic heated bed, the V2 version has a carborundum glass bed.

The Creality Ender-3 V2 comes at an affordable 3D printer price. It comes with an auto-levelling feature and a resume print function, which allows you to continue printing after power outages or other interruptions.

According to more than 300 reviews available on Amazon, users were pleased with the performance of this 3D printer. It has a rating of 4.4 out of 5 stars.

Most users were impressed with the stability, robust design, and print quality of the Ender-3 V2. However, others claimed that they had some problems with bed levelling. You can read some customer reviews below:

The Creality Ender-3 V2 is certainly at the top of my list of affordable 3D printers. The updated display, considerably enhanced user interface, 32-bit motherboard, and a few additional improvements make it an excellent 3D printer. What’s more, this quiet and well-built device, capable of generating high-quality 3D prints, will cost you less than £200.

When compared to its predecessors, Ender-3 and Ender 3-Pro, this printer’s performance exceeds all expectations. Even though it is a perfect printer for 3D printing beginners, advanced users will also appreciate the Ender-3 V2 thanks to its large build volume.

Hopefully, this Creality Ender-3 V2 review gave you a clear picture of what this 3D printer offers and how it compares to similar printers on the market. I’d definitely recommend it to anyone looking for a budget 3D printer with excellent print quality.

Is the Ender-3 V2 good for beginners?

The Ender-3 V2 is one of the best 3D printers for beginners. It comes with auto-levelling and resume print features.

Does the Ender-3 V2 have a heated bed?

Yes, the Ender-3 V2 has a heated bed, allowing for improved layer adhesion and the use of a wider range of materials.