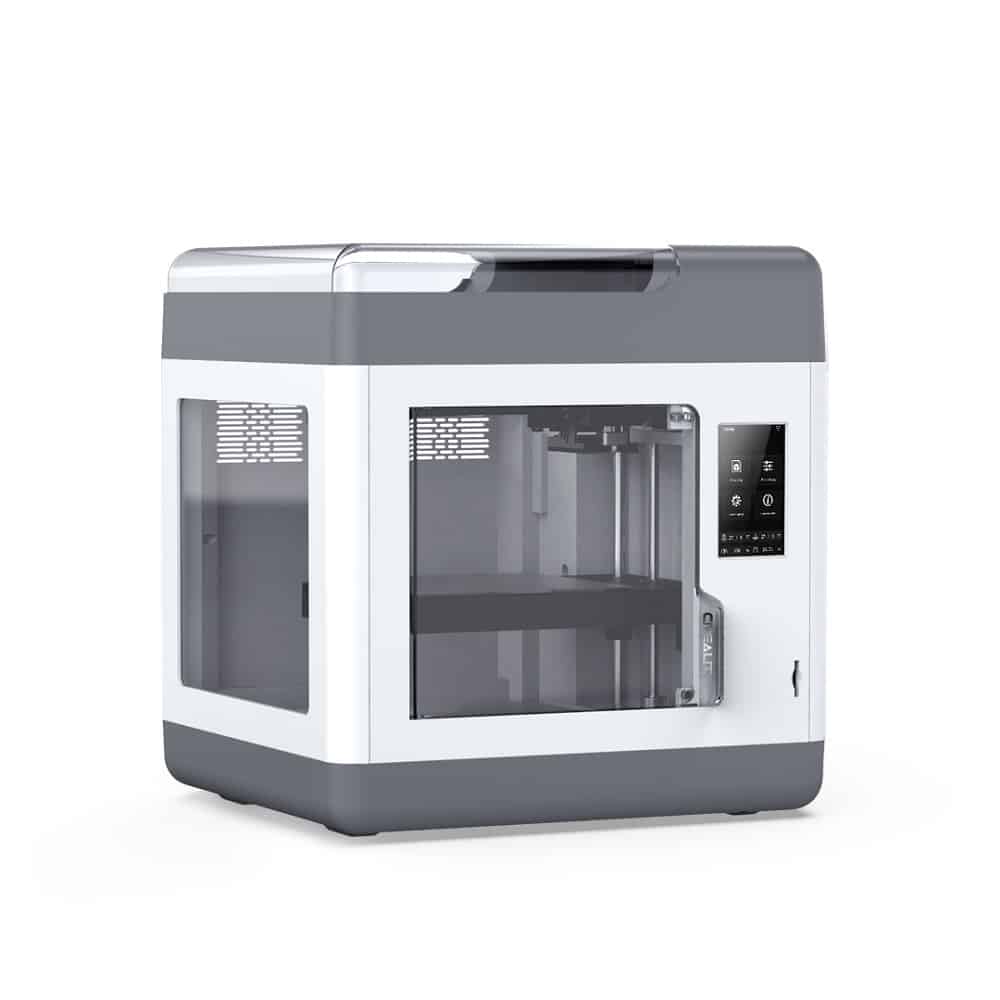 Creality is known for its open-frame 3D printers with large print areas, but the Sermoon V1 Pro represents a departure from that. It is a fully enclosed 3D printer with a build volume of 175 x 175 x 165 mm, making it one of the smallest and most affordable Creality machines.

With the Sermoon V1 Pro, Creality is targeting 3D printing newcomers and younger users, offering an incredibly user-friendly 3D printer that comes pre-assembled and ready to print out of the box. In this Creality Sermoon V1 Pro review, I’ll go over the main features of this 3D printer and see whether it is worth investing in.

Established in 2014, Creality has grown into one of the largest 3D printer manufacturers in the consumer space. The company is based in Shenzhen, China and is known for its high-quality and inexpensive machines suitable for home use. Creality produces both FDM and resin-based 3D printers, with the former including the hugely popular Ender and CR-10 series.

The Sermoon V1 Pro is intended primarily for use in schools and educational institutions, providing younger users with a safe and easy way to print smaller-scale objects.

Here are some of this 3D printer’s main features.

The Creality Sermoon V1 Pro has a fully-enclosed design with an acrylic window on the side and a transparent door at the front, allowing you to view the printing as it happens. The top of the printer has a removable clear lid that gives you another great viewing angle. It also provides easy access to the extruder, which is handy for loading filament or changing the nozzle.

You can leave the lid off during printing to improve airflow, but the fans at the side of the printer also do an excellent job at that.

Aside from the magnetic latching door, the front of the Sermoon V1 Pro also features a 4.3-inch Colour Touch display for controlling the printer and an SD card slot. 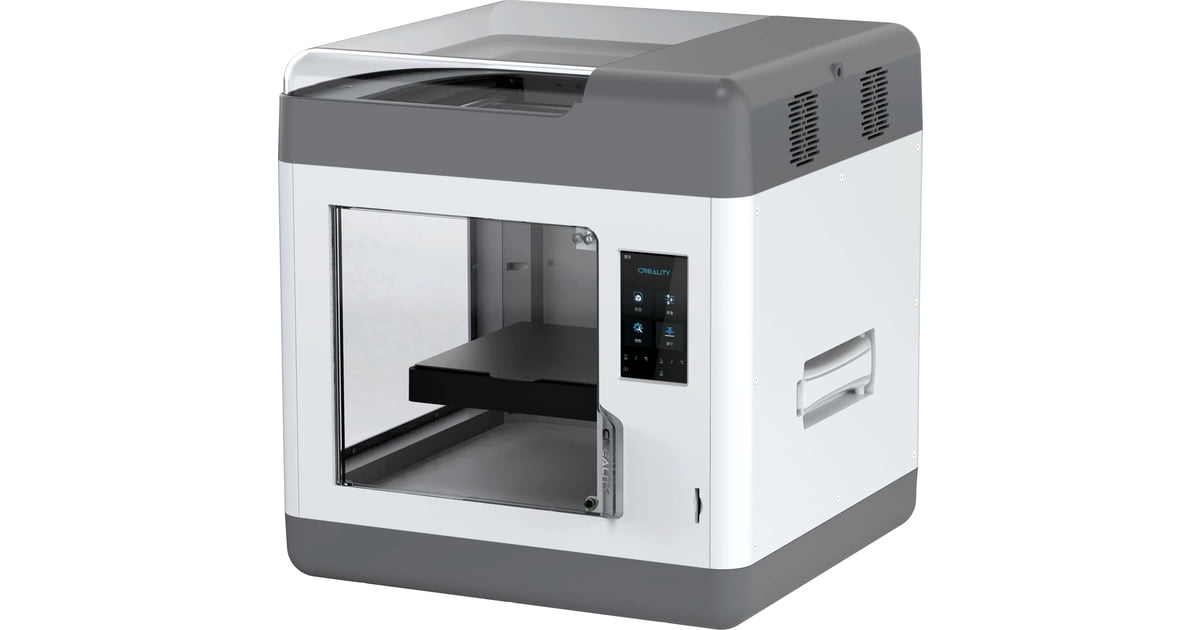 The only component of the Sermoon V1 Pro that is placed outside of the enclosed area is the collapsible filament spool holder found at the side of the machine. The printer’s fully enclosed design allows for a stable temperature inside and makes it somewhat quieter than typical, open-frame 3D printers.

A feature unique to the Sermoon V1 Pro is the auto pause sensor that automatically pauses the print when the magnetic door at the front of the machine is opened.

This safety trigger, along with the built-in camera for remotely monitoring the printing, are the two features that make this printer the “pro” version, as both features are missing from the slightly cheaper Sermoon V1.

Perhaps the biggest selling point of the Sermoon V1 Pro is that it features the Creality Sprite extruder. The all-metal direct drive extruder comes with dual gears, allowing for more reliable filament loading. The hotend has a standard 0.4 mm nozzle that can withstand temperatures of up to 250 degrees, which is sufficient for printing with a range of filaments, including PLA, ABS, PETG, and even TPU.

The Sermoon V1 Pro comes with a spring steel PEI-coated sheet that is magnetically attached to the print bed. This PEI sheet is superior to the carborundum glass platform featured on most other Creality machines, such as the Ender 3 V2.

The PEI coating allows for much better first-layer adhesion. The sheet is also removable and flexible, making it much easier to remove finished prints.

The size of the build plate is where some users may be disappointed. At only 175 x 175 x 165 mm, it is on the smaller side compared to many other Creality 3D printers, especially those belonging to the CR 10 series. However, this size is still more than sufficient for use at home or in the classroom, which is where the Sermoon V1 Pro is intended for in the first place.

You should also be aware the print bed can reach a maximum of only 80°C. While sufficient for printing most standard filaments, such as PLA, ABS filaments usually require a slightly higher temperature to print successfully. Low print bed temperature could lead to problems such as warping and poor first layer adhesion, and, as a result, the Sermoon V1 Pro is not the best option for printing ABS.

One thing that’s unique about the Sermoon V1 Pro is that it comes pre-levelled and tuned from the factory. In theory, that means you can print without ever worrying about levelling the print bed, which is a huge plus for inexperienced users.

Still, for the very best results, it is advisable to level the bed yourself at least once before initiating the first print. The Sermoon V1 Pro lacks automatic bed levelling, so the bed levelling has to be performed manually.

The Sermoon V1 Pro also comes with an auto-stop door sensor that automatically pauses the print in progress when you open the magnetic door, protecting children from the printer’s hot end and other moving parts. This function is enabled by default, but if you want to, it is possible to disable it from the printer’s settings.

Fully enclosed printers are already considered much safer than open-frame 3D printers, and with this feature, the Sermoon V1 Pro is easily one of the safest 3D printers on the market.

The Sermoon V1 Pro comes with built-in Wi-Fi, which means you can use the Creality Cloud app to send models to the machine to print directly. From the app, you can access all of the same features as from the Sermoon V1 Pro’s screen, such as pause or cancel the printing, only this time from your mobile device.

The integrated camera located inside the print area also allows you to keep an eye on your prints remotely in real-time via the app.

The Creality Cloud app has its own slicer, but the Sermoon V1 Pro is also compatible with the Creality Slicer and Cura.

The Sermoon V1 Pro comes pre-assembled and ready to print out of the box. All you need to do to get started is peel the plastic covers off the acrylic windows and carefully cut off all the cable ties on the inside of the printer. After that, it is simply a matter of plugging in the printer, inserting the SD card and loading the filament, which is also surprisingly simple.

All that is required is to push the filament through the small hole at the side of the printer and continue feeding it through the tube until it reaches the extruder. Then, simply press the Feed button on the touch screen, and the extruder will automatically grab the filament, with no other action required.

As expected, features such as a filament runout sensor and a resume print function are also present on this 3D printer.

Creality advertises the Sermoon V1 Pro as levelling-free, so you can start printing immediately after loading the filament. Still, it is recommended to level the bed yourself before the first print for the best results. The print bed can only be levelled manually, but luckily, this can be mastered relatively quickly.

All you need to do is place a piece of paper on the print bed and adjust the height of the bed with the up/down controls until there is slight friction when moving the paper underneath the nozzle. Then, repeat the same process until you fine-tune all five levelling points. Creality even includes a piece of levelling paper with the printer for this purpose.

The Sermoon V1 Pro’s fully enclosed design makes it quieter than most open-frame 3D printers. The printer operates at just under 45dB, which is a reasonable volume for use at home or at an educational establishment.

In addition, given this 3D printer’s excellent quality and features, you should expect good performance and print quality. The Creality Sprite extruder guarantees firm filament grip and even extrusion. At the same time, the PEI-coated sheet and the full enclosure contribute toward excellent first-layer adhesion, so you should expect high-quality and precise prints from the Sermoon V1 Pro.

This 3D printer’s recommended print speed is 50/60 mm/s. Although it can operate at speeds much higher than that, it is best to stick to the recommended speed for the best print quality.

The price difference between the two models is relatively small, so I think it is worth spending a few extra pounds on two of this 3D printer’s best features — a built-in camera and an auto-pause door sensor.

The Sermoon D1 is the first 3D printer in the Creality Sermoon lineup, currently available for  £465. Unlike the V1 Pro, the D1 has to be assembled and is only partially enclosed, with the top of the printer left open. The Sermoon D1 also has a build volume of 280 x 260 x 310, significantly larger than that of the Sermoon V1 Pro and most other enclosed 3D printers.

It also features a carborundum glass platform that can withstand temperatures of up to 100 degrees. That makes it more suitable than the Sermoon V1 Pro for printing ABS or any other type of filament that requires a higher bed temperature.

What the Sermoon D1 lacks in comparison to the Sermoon V1 Pro are a built-in camera and Wi-Fi connectivity. However, if you are looking for an enclosed 3D printer with a larger print area and don’t mind the hassle of assembling or the lack of remote printing, the Sermoon D1 is an excellent alternative.

The CR-200B is another one of Creality’s fully enclosed desktop 3D printers. Available for only £275, it is also one of the company’s most affordable machines. It has a print area of 200 x 200 x 200, slightly larger than the Sermoon V1 Pro’s.

Same as the Sermoon D1, this printer is also only partially enclosed and comes with an open top. For such a low-priced 3D printer, the CR-200B comes with a nice set of features, including a filament runout sensor, an internal LED light, and a resume print function. Remote printing via the Creality Box is also possible with the CR-200B, but this is an optional extra, not a default feature.

Given as it offers a slightly larger print volume at a lower price point, the CR-200B could be a good choice if you are willing to give up features such as the integrated camera, full enclosure, or auto-pause sensor.

The trade-off is that it has a slightly smaller build volume of 150 x 150 x 150 mm and lacks some of the Sermoon’s more advanced features, such as a built-in camera and removable build plate.

At the same time, experienced users who want a more DIY approach are not left behind, as they can still level the bed manually to allow this printer to reach its full potential. The built-in camera, Wi-Fi connectivity, and safety trigger are other welcome additions that make this 3D printer even more convenient to use.

Is Sermoon V1 Pro worth it?

Yes, the Creality Sermoon V1 Pro is an excellent choice for those looking for an enclosed, user-friendly, and ready-to-use machine with a host of advanced features, including Wi-Fi connectivity, an integrated camera, and a direct-drive Sprite extruder.

Yes, the Sermoon V1 Pro is an excellent beginner 3D printer. It comes pre-assembled, pre-levelled, and is ready to print out of the box.