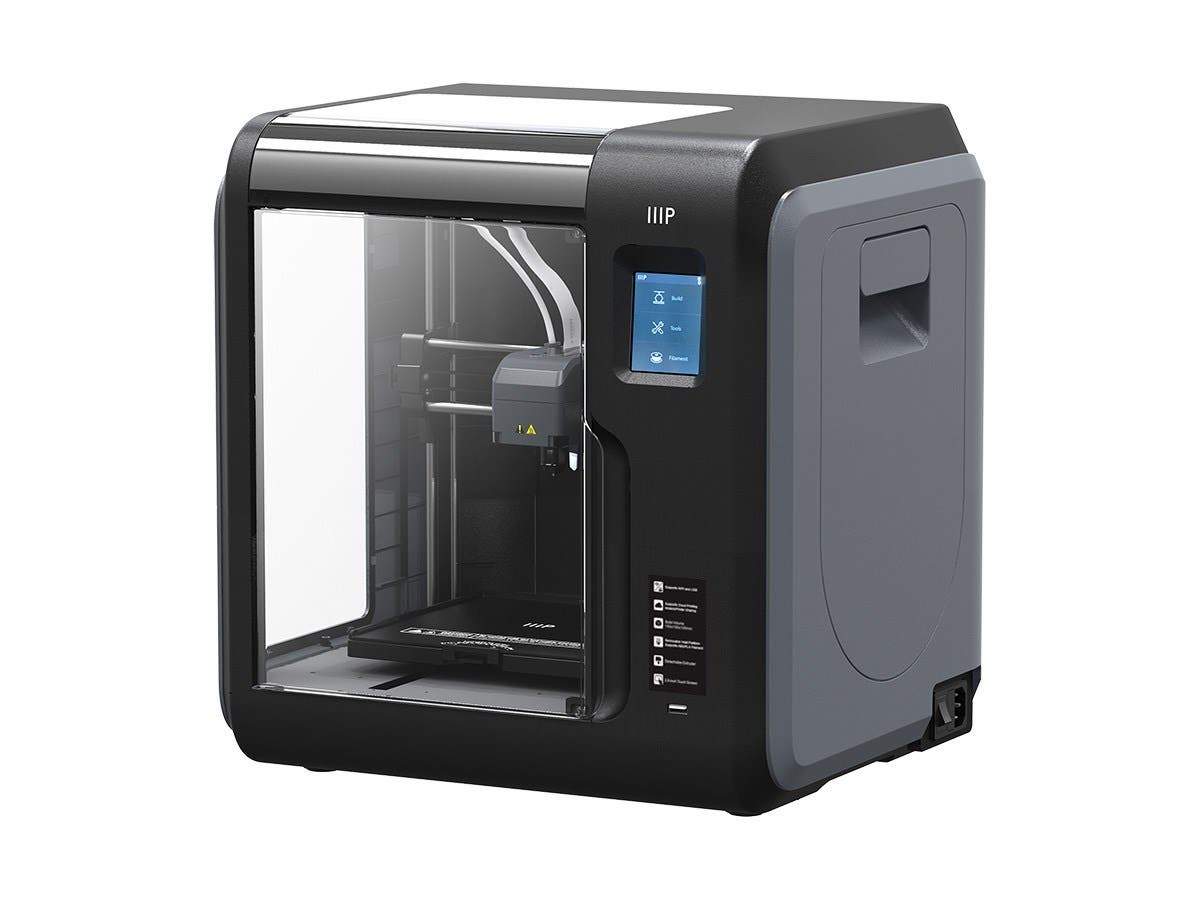 The Monoprice Voxel is a competitively priced entry-level 3D printer aimed at hobbyists and home users. Coming with a fully enclosed print space and an array of useful features, like automatic bed-levelling and a heated print bed, it is a great choice for those looking to get started with fused filament fabrication (FFF) printing.

In this Monoprice Voxel review, we’ll take a closer look at the features and benefits of this machine and compare it to some of the other top-rated 3D printers on the market. So, whether you’re just starting out in 3D printing or you’re looking for an affordable option, read on for my thoughts on the Monoprice Voxel.

Monoprice is a US-based online retailer known for its consumer electronics and tech products, such as HDMI cables, speakers, and computer accessories. The company has been in business since 2002 and has built a reputation for offering high-quality products at competitive prices.

Monoprice has also branched out into the world of 3D printing, with a line of its own branded 3D printers that all have usability and affordability in common. Other excellent Monoprice 3D printers are the Monoprice Mini Delta V2 and the Select Mini V2.

The Monoprice Voxel is a desktop FFF 3D printer that supports PLA, PLA+, ABS and a range of composite filament types. It comes with assisted print bed levelling and a built-in camera that allows you to monitor the printing process remotely from a cloud-based slicing application like Polar Cloud.

Other noteworthy features include a removable heated print bed, easily changeable nozzles, and auto feeding with a filament sensor. Voxel’s internal memory also means you can easily store 3D files on the machine and start printing them without the need for an external connection.

The Monoprice Voxel also comes fully assembled and ready to print straight out of the box.

Measuring 400 x 380 x 405 mm, the Monoprice Voxel is a relatively compact machine with a cube-like shape. At only 9 kg, the unit is also very easy to manage and move around.

The Monoprice Voxel is a fully enclosed 3D printer, which is not very common for a 3D printer in its price range. It also comes with see-through plastic panels on the sides and top that make it easy to keep a close watch on your prints as they happen, aided by the built-in LED lights on the tool head.

In addition, the heated print bed is both removable and bendable, making it easy to lift off finished prints.

The Monoprice Voxel has a build volume of 150 x 150 x 150 mm, which is on the smaller side compared to some other printers on the market. However, that should still be sufficient for home users’ needs.

The built-in camera is located inside the enclosed print area, allowing you to monitor your prints remotely via wi-fi.

There is also a small 2.8-inch colour IPS touch screen that is located on the front of the machine and provides easy access to the printer’s on-device controls. However, once you’ve connected your printer to the MP FlashPrint software, you will probably find yourself handling most functions from there. 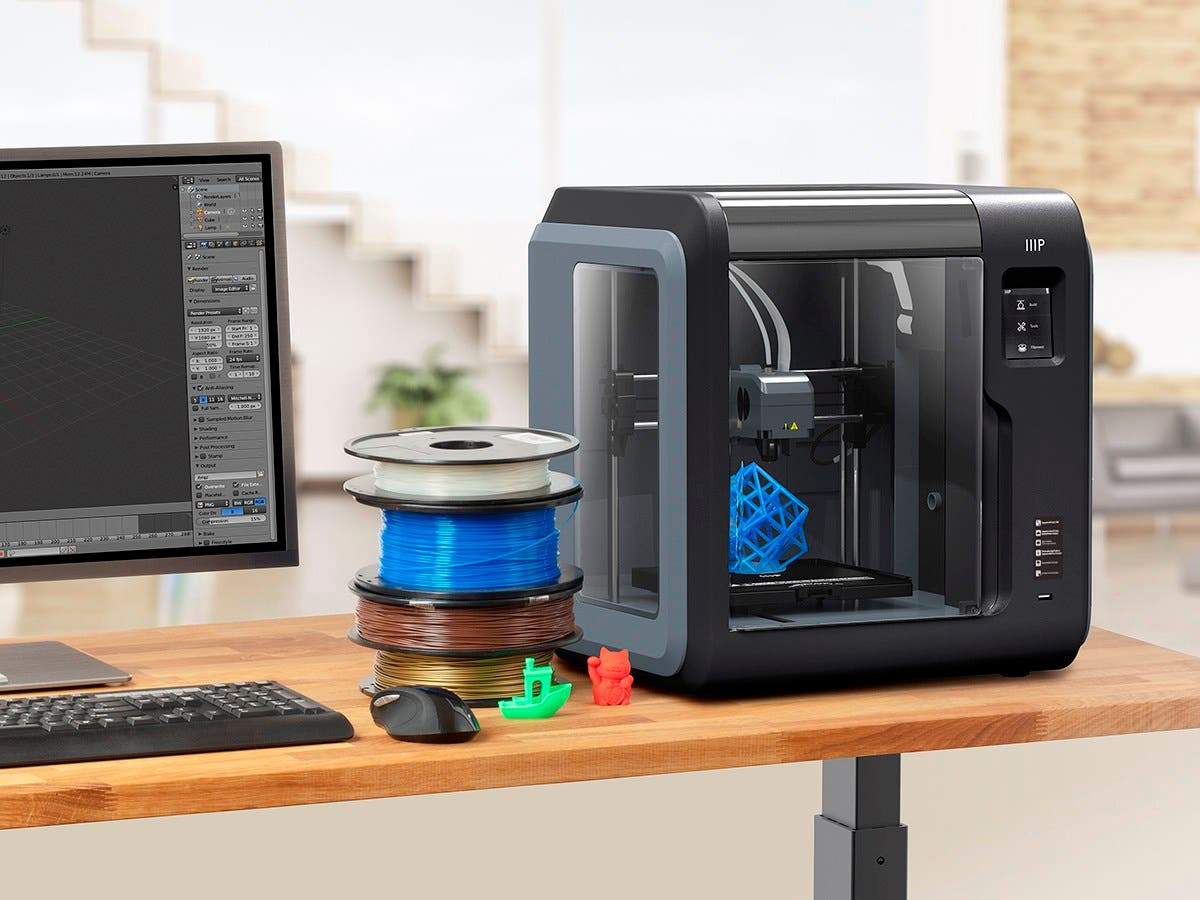 The Monoprice Voxel has a heated print bed, which is essential for printing with ABS filament. A heated print bed also goes a long way to prevent uneven first layer adhesion and warping. The maximum temperature of the bed is 60°C.

The print bed can also be removed and flexed, allowing you to easily peel your 3D printed objects off without the need for a scraper. The Monoprice Voxel also comes with an additional print bed, so you can start a new print job immediately after finishing the previous one.

The Monoprice Voxel is a fully enclosed desktop printer, which means that it will be much quieter than an open-frame printer, and your prints will be less likely to be affected by drafts or other environmental factors. In addition, the see-through door can also be closed with a magnetic latch during printing, ensuring a safe and quiet printing process.

The Monoprice Voxel has an assisted bed levelling system that makes calibration as simple as a single tap on the touch screen. The system uses sensors to detect the level of the build plate and make adjustments accordingly. This takes the guesswork out of levelling the bed and ensures that your prints will be of the highest quality.

The printer comes fully calibrated, but you will probably need to recalibrate it after a couple of prints, as the print bed will settle slightly over time. You can access this feature from the Settings menu on the touch screen display with a single tap on the “calibrate” icon.

The Monoprice Voxel comes fully assembled and ready to start printing. All you need to do is plug it and load your filament of choice.

The filament spool fits nicely into a closed compartment on the right side of the printer and loading the filament is made extremely simple by the automatic feed mechanism. There is also a built-in sensor, which will detect when the filament is running low and pause the print automatically, giving you time to reload before it resumes.

All of these features, coupled with the fact that the Monoprice Voxel comes fully calibrated, make for an incredibly simple and streamlined setup.

Once you’ve plugged in the printer and loaded the filament, you will be ready to start printing. You can connect the printer to your home wi-fi network via the touch screen or use the wired Ethernet connection instead.

The MonoPrice Voxel also comes with its own slicing software called MP FlashPrint. The software can be downloaded for free from the official Monoprice site and is available for Windows, Mac, and Linux operating systems.

Once you install the MP FalshPrint software and connect it to your Monoprice Voxel, you will be able to import your first 3D model, slice it, adjust the print settings, and send it to the printer to begin printing.

The software is fairly easy to use, with a similar interface to other popular slicing apps, such as Cura or Slic3r. It requires very little in the way of configuration, so you can be up and printing fairly quickly.

Based on your skill level, the printer allows you to choose between two modes: basic and expert. Choosing the expert mode will allow you to access more advanced settings, such as retraction speed, support thickness, raft layer height, and others.

Alternatively, you can also connect the Monoprice Voxel to the popular cloud slicing app Polar Cloud, which will enable you to control the printer from any internet-connected device. The Polar Cloud app can also connect to the Voxel built-in camera, allowing you to monitor the printing process remotely.

The Monoprice Voxel has a 100 to 400-micron resolution, which is on par with other printers in its price range. It also has a layer range of 0.05 to 0.4 mm, giving you a good level of detail and accuracy.

The printer produces high-quality prints with sharp details and smooth surfaces. Due to the machine’s smaller build area, it is ideal for printing miniature models, but it can also easily handle larger prints.

The machine is also capable of printing at speeds up to 100 mm/s, though it produces the most high-quality prints at speeds of 60 mm/s.

The Monoprice VoxelConsidered a rebranded version of the Flashforge Adventurer 3, so there are very few differences between the two printers. Both of them come with a build volume of 150 x 150 x 150 mm, a fully enclosed print chamber, and an automatic filament feeding system.

The Flashforge Adventurer also has a heated print bed which is removable and flexible, and a built-in camera for remote monitoring of the printing process.

Basically, the two printers only differ aesthetically and in the software used. The Flashforge Adventurer 3 uses the Flahpring software, while the Monoprice Voxel uses its own rebranded version, the MP Flashprint.

In addition, both machines fall within the same price range, but at £329, the Flashforge Adventurer 3 is slightly more affordable than the Monoprice Voxel.

Like the Monoprice Voxel, the Ender 3 comes with a heated print bed and the ability to print ABS, which is impressive for such a low-priced machine. The Ender 3 is also a fully open-source 3D printer,  which makes it a great option for 3D printing enthusiasts and DIYers, as it offers more flexibility and customisation options.

However, what the Ender 3 lacks is automatic bed levelling, which means you will have to level the print bed manually, which can be time-consuming and frustrating, especially for beginners. Another thing the Ender 3 lacks compared to the Monoprice Voxel is a built-in camera, which means you will not be able to monitor the printing process remotely.

For an entry-level 3D printer, the Prusa Mini offers some excellent features typically found in higher-end machines, such as a removable magnetic build plate, automatic bed levelling and a Bowden tube extrusion system.

The Prusa Mini also has a build volume of just 180 x 180 x 180, which is smaller than most 3D printers on the market, but still slightly larger than Monoprice Vixel’s build volume. Despite that, it is still more compact in size, making it ideal for home users with not a lot of space to spare.

Design-wise, the Prusa Mini is an open frame 3D printer with its mainframe made of tube extrusion rather than metal, which is a significant departure from Prusa’s other 3D printers.

Like the Monoprice Vixel, the Prusa Mini comes with a colour LCD screen attached to it, but one thing it lacks in comparison is a wi-fi connection, coming with an ethernet port instead.

Overall, the Monoprice Voxel is a great 3D printer for those who are just starting out in the world of 3D printing. It is easy to set up and use, has excellent print quality, and comes with an impressive selection of features for its price point.

So, to conclude this Monoprice Voxel review, If you’re looking for an affordable and beginner-friendly 3D printer that doesn’t sacrifice quality or features, the Monoprice Voxel should definitely be at the top of your list.

Can you use Cura with Monoprice Voxel?

Yes,  you can use Cura with Monoprice Voxel. You just need to download and instal the slicing software on your computer and connect the Monoprice Voxel in the app’s settings.

What software does Monoprice Voxel use?

The Monoprice Voxel uses the MP FlashPrint slicing software, which can be downloaded for free from the Monoprice website. The software is available for Windows, Mac and Linux operating systems.

Is Monoprice a good 3D printer?

Yes, the Monoprice Voxel is a good 3D printer for the price, with excellent print quality and performance. It also has a range of features that are not usually found on printers in its price range, such as an assisted bed levelling system, a heated print bed, and a built-in camera. If you’re looking for a good all-around printer that won’t break the bank, then the Monoprice Voxel is definitely worth considering.

Can the Monoprice Voxel print TPU?

The Monoprice Voxel is capable of printing TPU, although you may need to adjust the print settings slightly to get the best results.