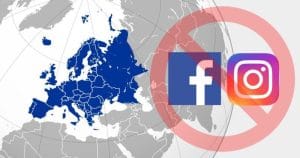 The company issued the warning in its annual report to the US Securities and Exchange Commission. In the report, the social media giant stated that it could shut down its Facebook and Instagram operations in European Union countries unless it is given the option to transfer and store European users’ data on US-based servers.

In July 2020, the Court of Justice of the European Union invalidated the EU-US Privacy Shield framework that Meta has relied on in the past to continue transatlantic data transfers. The invalidation happened due to concerns that the framework did not protect European users from US government surveillance.

In addition to the Privacy Shield framework, Meta also relies on the so-called model agreements or Standard Contractual Clauses (SCCs) to carry out the data transfer of EU users across the Atlantic. However, these model agreements have faced similar criticism in Brussels and other parts of the EU.

That led the company to stress the importance of processing user data between countries and regions for the provision of its services and targeted advertising. Furthermore, Meta warned that it would probably have to walk away from Europe if it could no longer use the current model agreements or a new framework was not adopted.

It stated the following:

“If a new transatlantic data transfer framework is not adopted and we are unable to continue to rely on SCCs or rely upon other alternative means of data transfers from Europe to the United States, we will likely be unable to offer a number of our most significant products and services, including Facebook and Instagram, in Europe, which would materially and adversely affect our business, financial condition, and results of operations,”

“We have absolutely no desire and no plans to withdraw from Europe, but the simple reality is that Meta, and many other businesses, organisations and services, rely on data transfers between the EU and the US in order to operate global services”.

European regulators are currently drawing up new legislation that will decide how EU users’ data is transferred to the US and working on resolving the issue with the US government, but nothing is yet for certain.

The social media giant also made news recently for setting the record for the largest one-day value plunge in the history of the US, when it lost more than $232 billion in value, which is mainly due to the company investing heavily in its Reality Lab segment.

I have always called for an alternative to the EU US #privacyshield to find a balanced agreement on data exchange + always called for #GDPR flexibility. However, #META cannot just blackmail the EU into giving up its data protection standards, leaving the EU would be their loss.

Other European leaders have also embraced Meta’s threat to shut down its apps in Europe, with Germany’s economy minister, Robert Habeck, telling reporters:

“After I was hacked, I have lived without Facebook and Twitter for four years, and life has been fantastic”.

“I can confirm that life is very good without Facebook and that we would live very well without Facebook. Digital giants must understand that the European continent will resist and affirm its sovereignty”.

This is not the first time Meta has warned to pull its services after making similar threats against Australian users in 2020. So, it is highly unlikely that the company will pull its most profitable services from Europe, seeing as it is currently making over $6.8 billion in advertising value from EU countries alone.