Having a proper VPN (or virtual private network) has become essential in this age of heightened online activity and privacy threats. A VPN guards your identity so that you can use the internet without worrying that your activity will be traced back to you.

Are you unable to visit certain websites because your internet service provider has blocked access? Do you want to access region-blocked services such as Netflix? Do you want to avoid censorship while you’re travelling in a foreign country?

The benefits of VPN include all of the above and much more. Here, we are going to review the Bitdefender Premium VPN service which is one of the more popular VPN services out there.

We will provide all the details you need to know about using Bitdefender Premium VPN.

First, check out the main areas we will cover in this Bitdefender Premium VPN review.

What is Bitdefender Premium VPN?

The Bitdefender Premium VPN is a VPN service provided by Bitdefender, a Romanian company that was founded in 2001. The headquarters of the company is located in Bucharest, however, the company has offices in several different countries including the United States, Canada, the UK, Germany, and so on. The company’s services are distributed through partners in over 150 countries.

The company provides a range of technology services. The company is heavily focused on research and development. They have been granted over 400 different patents for their inventions. They own patents relating to machine learning algorithms for detecting online threats and malware, deep learning, as well as other threat-detection techniques. The company invests around 25% of its total budget in moonshot projects.

They originally started operations with an anti-virus software provider. The company was one of the first technology-based startups in Romania.

Bitdefender has also won numerous awards for its services over the years. In 2021, the company was named “Top Player” in the Market Quadrat report by The Radicati Group.

Bitdefender Premium VPN is a secure VPN that offers all the basic features that one would expect from a VPN. When using the service, you get complete anonymity for your online activities. This means that even your internet service provider cannot track your online activity and conduct. You can use this VPN for torrenting and streaming.

Also, as with any other VPN, you can also download content through torrents that would otherwise be unavailable. The VPN access allows you to make such downloads without being tracked by governmental authorities or others.

In addition to these basic features, the Bitdefender Premium VPN also provides certain value-added features which are not common amongst other VPN providers.

Here is a breakdown of such features.

Use Up to 10 Devices Simultaneously

Bitdefender’s VPN allows you to use its services through ten different devices. This means that with a single subscription, you can have online VPN protection for up to ten devices. You can use the VPN through your personal computer, work computer, smartphone, family computer, family tablet, and so on. In our opinion, the ten devices feature should be enough for even the most demanding of users and their families.

This VPN service does not place any limit on the amount of encrypted data you can send back and forth, unlike other VPN providers. With Bitdefender, you can browse the internet and download as many files as you like without incurring any additional costs.

Privacy features are paramount for any VPN. Ideally, no VPN provider should keep the traffic logs of its users. However, many still prefer to keep some logs in order to optimize their services and also prevent abuse. We have gone through the documentation available on Bitdefender’s website, and have concluded that they only save randomly generated data to ensure proper performance. They do not keep any individual logs of their users.

The traffic through this VPN is also routed through HotSpot Sheild’s VPN servers, and, even their privacy policy clearly states that no logs are maintained.

Overall, we conclude that it is a safe VPN to use for browsing and other internet activities.

4000+ Servers Around the World

The number of servers maintained by the VPN service provider and the countries that they are in, matters a lot. These servers are responsible for anonymizing your online activity and allowing you to access region-blocked services.

Bitdefender’s VPN allows you to access servers located in 49 different countries. Hence, you have access to a large part of the internet which you may be unable to access otherwise. This includes popular countries such as the US and the UK.

Multi-platform support is important since it allows you to access the VPN regardless of the kind of device you are using. This VPN supports devices that run on Windows, macOS, Android, and iOS, which basically covers approximately 90% of all devices out there.

The Bitdefender Premium VPN is also a mobile-friendly service. Their service is available on both Android and iOS phones. Their app for these devices has been found to be quite user-friendly and full of intuitive features. It is worth mentioning that the iOS version also has a kill switch (which is rare for iPhone VPN services).

The VPN Protocol is the underlying technology that is used by the VPN service provider. It determines how a VPN will format and send data around the internet network. The VPN protocol also determines the speed of your connection.

Bitdefender uses the fastest VPN protocol that is currently available. This is the Hydra Catapult which has been developed by Hotspot Shield. Bitdefender’s VPN Protocol allows data to be sent laser fast through the internet and making it one of the fastest VPN services out there. Users have been known to experience VPN speeds up to 40 Mbps thanks to this VPN protocol.

Bitdefender Premium VPN is a paid VPN service that is available in a variety of plans and packages depending on the region of the world in which they are offering their services. However, for the purposes of this review, we will be discussing the VPN’s UK prices and plans.

Overall, after comparing the price of Bitdefender Premium VPN with other similar VPN service providers, we conclude that Bitdefender’s service is available at a significantly more reasonable price.

If you want to try out their VPN services, a seven-day free Bitdefender trial is also available once you sign up for a Bitdefender Central account. Furthermore, once you start using their services, you also get a 30-day money-back guarantee in case you are not satisfied.

The speed of a VPN service is of utmost importance. Every VPN user will experience a drop in speed due to the VPN protecting their activity and routing their connections through its servers. However, the question is how much lag will you experience?

Bitdefender Premium VPN recently upgraded their VPN protocol to Hotspot Shield’s Catapult Hydra. This has made a significant difference to the service’s speed and performance. The VPN’s download speeds can go as high as 310 – 419 Mbps which is comparable to the fastest VPN services out there. However, it is still lower than ExpressVPN’s 490- 630 Mbps. While testing from Europe, this VPN’s upload was also found to be at par with the best VPNs in the market.

Users of Bitdefender VPN can also comfortably stream videos and other types of content. Streaming Netflix US from the UK has been found to work without any buffering. In addition to providing anonymity, Bitdefender also promises access to content and they seem to be delivering on that promise. It may be worth mentioning that a potential downside is that users cannot access Disney+ or Amazon Prime Video through this VPN.

Signing up with Bitdefender Premium VPN should be relatively easy and painless. The first step is to choose a plan. You have the option of selecting between a yearly plan and a monthly plan. The features for both plans are the same. You do end up saving more if you opt for the yearly plan which comes with a significant discount. 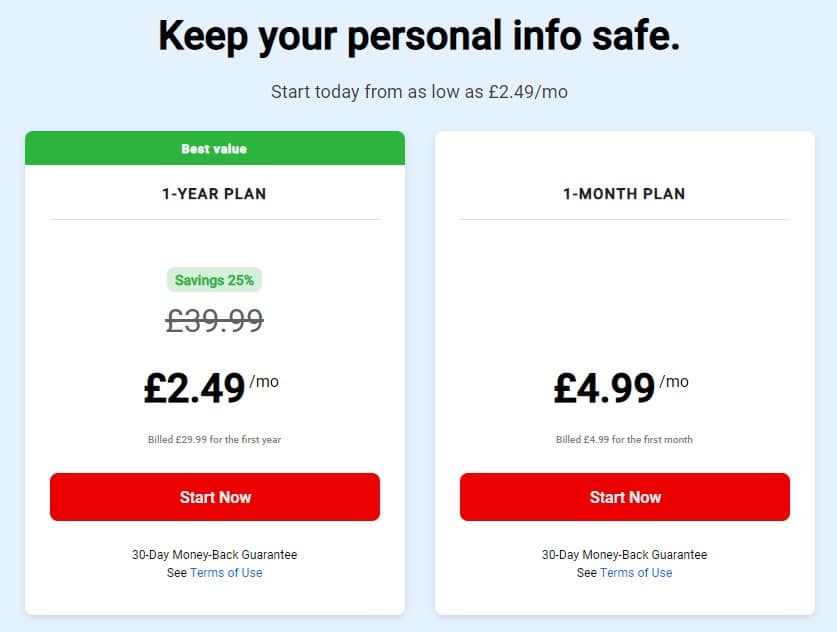 In the next step, you will be asked to fill up your payment details. With Bitdefender, you have the option of paying through credit cards, PayPal, WebMoney, or direct bank transfer. This entire step should not take more than 3 minutes.

Once the payment is successful, you will receive a confirmation from their end. And that’s it. You have officially signed up for the VPN service.

If you face issues during the registration process or afterwards, you can always contact their customer support team. Customer support is available through a variety of channels including 24/7 live chat, email, FAQs, expert community, and phone calls.

We tried contacting their customer support team through live chat and got a response within a few minutes. Overall, we think their customer service is helpful and responsive.

In this section, we’ll be comparing Bitdefender’s VPN service with a few competitors. This should provide you with valuable insight into how their service compares with others.

We will be comparing Bitdefender with some of the best VPNs available in the market today.

Surfshark is another great VPN service. The pricing for their service is comparable to Bitdefender’s. Their lowest monthly price is £1.99 which is slightly lower than Bitdefender’s, but it’s noteworthy that the price is for Surfshark’s 2-year plan.

NordVPN is probably one of the best VPN services out there. They are known for their strong encryption and quick speeds.

It is considered one of the best VPN software since it allows users access to Netflix, iPlayer, as well as Amazon Prime Video. In comparison, Bitdefender only manages to unblock Netflix for its users.

However, NordVPN is slightly more expensive with its lowest monthly cost coming in at around £2.89.

Finally, we’d like to discuss how users feel about Bitdefender. Is it the best-rated VPN?

On Trustpilot, there are 6,391 user reviews from which Bitdefender VPN has scored a rating of 3.9 out of 5 stars.

Other reviews we found for Bitdefender were largely positive. Even though Bitdefender’s service is not the best VPN software out there, it is
a solid option at a reasonable price point.

The main advantages that Bitdefender offers over other services are the high speeds thanks to its Hydra Catapult VPN protocol as well as the ability to unblock Netflix. Bitdefender is also considered a good VPN for Chrome.

Bitdefender is a good choice for anyone looking for a decent VPN service at an affordable cost. Bitdefender is available on a variety of popular platforms and using it is hassle-free. Even though it does not offer advanced features, it will more than suffice for basic users. This concludes our Bitdefender Premium VPN review. We hope you’ve found it both informative and helpful.

This VPN service is owned by Bitdefender. Bitdefender is a technology solutions provider based in Romania. The company was founded in 2001. Apart from VPN services, the company provides a range of products and tools, especially in the cybersecurity sphere.

That depends on the country which you’re from. VPN services are legal in most countries; however, they are illegal in some others.

This VPN service can provide speeds of around 350 Mbps. These speeds are enough for 4K streaming. Most users will not have performance problems when using this VPN, however, it will slow down your connection a little bit.