Have you ever wondered who can track you online and what happens if your personal information suddenly gets stolen? To avoid this inconvenience, you’ll need a virtual private network.

If you are searching for some straightforward VPN options, check out Hotspot Shield VPN. This virtual private network boasts an impressive privacy policy, fast speeds, and the ability to unblock most streaming sites.

To find out how this VPN can help you browse securely, read this Hotspot Shield VPN Review and find out the following:

What is Hotspot Shield VPN?

Hotspot Shield is a virtual private network service that protects your privacy online.

It was first operated by AnchorFree, Inc. Now it’s owned by a company called Pango, based in Silicon Valley with offices in Russia and Ukraine.

By using this virtual private network, you‘ll stay safe from hackers and eliminate annoying ads. Hotspot Shield doesn’t log IP addresses or your VPN browsing activity. It is a secure VPN with a strict policy and a wide range of features.

Hotspot Shield offers 1,800+ servers in more than 80 countries. You can even select a city within those countries. Still, you won’t be able to choose an individual server, which is the case with many VPNs.

The number of locations served by Hotspot Shield is astonishing. It even has servers in four African countries and South America — which are two continents frequently ignored by most VPN companies. Hotspot Shield also provides servers in countries with repressive internet policies, such as China, Russia, Turkey, and Vietnam.

Hotspot Shield is available for Windows, macOS, Android, and iOS. You can also download the browser extension for Chrome. Unfortunately, it is not compatible with Linux, smart TVs, gaming devices, routers, and other devices. Also, keep in mind that Hotspot Shield’s desktop apps are easy to use, but its mobile apps can be a bit tricky.

Hotspot Shield offers an array of security services and a specially designed protocol called Catapult Hydra. This unique VPN protocol maximises speed, and it is cleverly designed to fix some of the latency issues. To enhance the VPN speed of data transmission, this VPN protocol uses multiple channels. Another protocol this VPN uses is the IKEv2 protocol, which is great for Windows and iOS.

If you purchase the paid VPN version, you may use five simultaneous connections and access all VPN servers without any data limits.

Other than Netflix, Hotspot Shield can unblock several other streaming sites like Hulu, BBC iPlayer, Disney+, All 4, and Amazon Prime Video.

Although some countries block websites with content deemed offensive to their culture, using a VPN is not a crime.

Hotspot Shield is a solid VPN for torrenting. It allows torrenting on all servers and platforms,  using P2P file sharing, uTorrent, and BitTorrent on its network. The automatic Kill Switch can ensure that your IP address stays inaccessible in case of a VPN error. When it comes to open access to torrents, Hotspot Shield’s Smart VPN feature can split-tunnel your activity or send only certain types of traffic through the virtual private network.

This VPN offers a split-tunnelling feature that is handy for streaming video. Split tunnelling allows you to access a public network while still being connected to Hotspot Shield. This feature is also great because it enables increased network speed.

Hotspot Shield has a Kill Switch and DNS leak protection. Kill Switch is an advanced feature that keeps your data safe in case your connection suddenly drops. However, it is not available for macOS or iOS.

Like several other VPNs, Hotspot Shield sometimes works and sometimes doesn’t work in China. So if you live there, you should stick to a more reliable VPN, like NordVPN or ExpressVPN.

More than 650 million people trust Hotspot Shield VPN, which generously offers a free subscription to all of its users. However, if you prefer to have better features with a paid VPN, then check out the pricing table below:

Important note: you can pay only by credit card or PayPal.

Does Hotspot Shield have a free version? Yes, Hotspot Shield free VPN version is available, but it is restricted to 500MB of bandwidth per day and offers only one simultaneous connection. Also, you will not be able to access streaming sites.

The paid VPN version, on the other hand, allows you to test its features for 45 days. During that period, you’ll have enough time to learn how Hotspot Shield works.

Using a free VPN trial may result in the sharing of some of your private information, such as your city-level location, unique advertising or mobile ID, MAC address, and Wireless carrier. That’s the most significant disadvantage of this VPN since this kind of data collection could be enough for hackers or third-party advertisers to track your online activity.

Did you know that Hotspot Shield was the fastest VPN of 2020? This virtual private network provider offers great download speeds on all servers. It is also great for streaming TV from other countries thanks to its excellent connection speed.

You can see speed test results below:

Hotspot Shield VPN’s servers in the European Union and Asia are excellent according to speed performance analysis. Hotspot Shield reached an impressive 380Mbps on a 600Mbps line in the US. Thanks to its protocol — the Catapult Hydra, this VPN has a better speed performance than most of the competition. However, if you use its protocol IKEv2, note that speed can drop to 35 – 40Mbps.

Although it is no longer the fastest VPN, Hotspot Shield reduced download and upload test results by 31.3% and 60%. Also, during speed testing, Hotspot Shield increased latency by 42.9%.

Even though Hotspot Shield doesn’t log your online activity, it collects some other information. Its Privacy Policy clarifies the specific types of data that may be recorded and stored, including:

This data should not be traceable back to you as Hotspot Shield tells us it’s anonymised. However, no independent audit has tested this claim. It is worth noting that Hotspot Shield also boasts Malware Protection to prevent phishing attacks and harmful viruses.

To register a Hotspot Shield account, take the following steps:

For a free trial, you must click on Start Free Trial. However, if you want to get access to more features, opt for the paid VPN version. 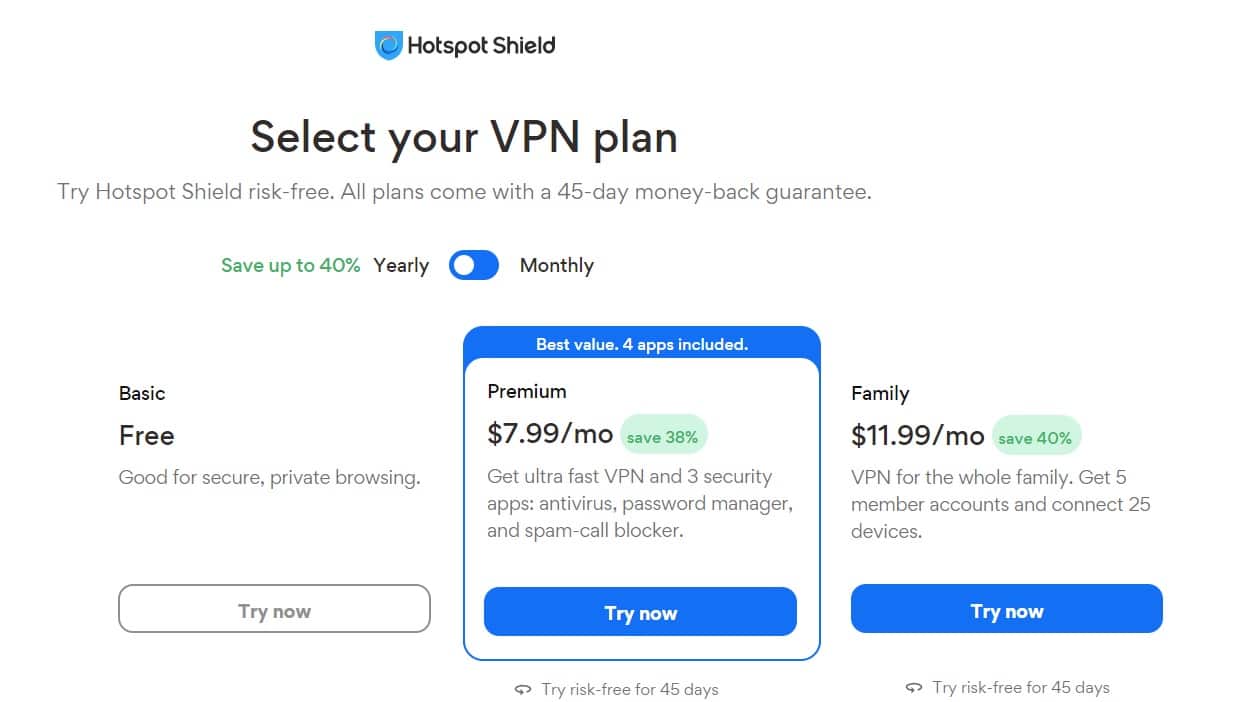 After writing down your email address, you’ll need to verify it. 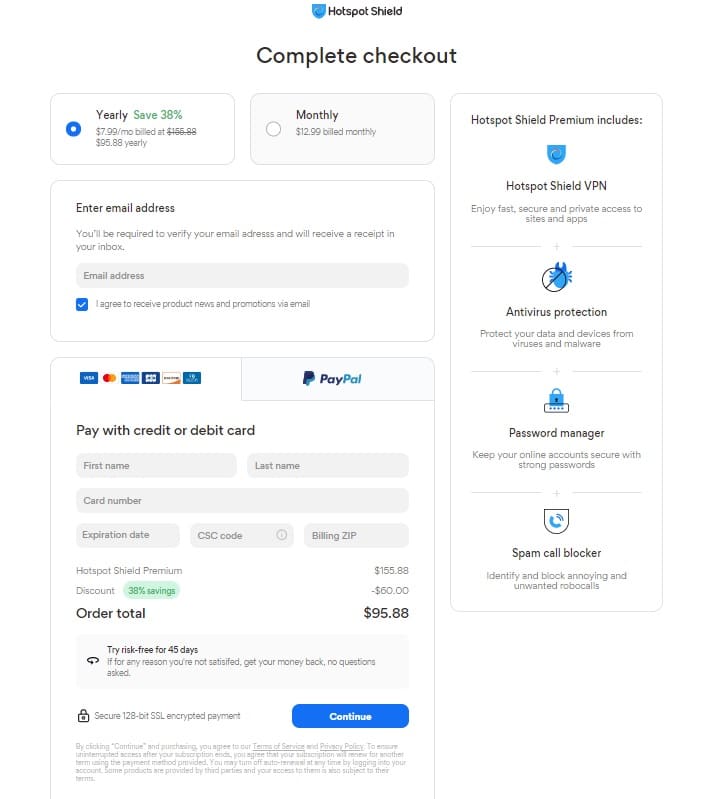 Once you’ve submitted the form containing all required personal information, the registration process is finished. Next, click on the Continue button to begin browsing safely.

I will compare Hotspot Shield with other VPN providers in this section so that you have a complete understanding of the features offered by each of them.

Hotspot Shield VPN is one of the best VPNs for streaming, unlike IPVanish. Hotspot Shield can unblock Netflix, Hulu, BBC iPlayer, Disney+, and All 4.

It is a reliable virtual private network because it uses the Catapult Hydra protocol. Compared to the OpenVPN and IKEv2 protocols used by IPVanish, Catapult Hydra is faster and has more powerful features.

For those interested in trial periods, Hotspot Shield will return your money within 45 days. IPVanish, on the other hand, offers a 30-day money-back guarantee.

Hotspot Shield can help you access your favourite content in China while maintaining a secure connection. But, contrary to this, IPVanish isn’t available there.

Hotspot Shield has more servers and supports more locations than Proton VPN. Hotspot Shield VPN is also better for streaming since Proton VPN only allows it for Plus and Visionary users. If you use a free Proton VPN plan, you will need to upgrade your subscription to be able to stream videos.

Hotspot Shield is a great  VPN for torrenting because it allows torrenting on all servers and platforms. It uses P2P file sharing, uTorrent, and BitTorrent, unlike TunnelBear which has no specialised P2P servers. Its free version is not suitable for torrenting.

In terms of trial periods, Hotspot Shield will refund your money within 45 days after purchase if you aren’t satisfied with the service. TunnelBear, on the other hand, works on a case-by-case basis. You will be lucky if TunnelBear’s customer service gives you your money back.

The power of online reviews to influence your purchasing decisions is huge. Based on the reviews, you should definitely opt for Hotspot Shield. It’s affordable, reliable, and easy to use. Check out the following reviews to help you make up your mind:

According to these HotSpot Shield reviews, it is the perfect VPN for streaming. Its customer service is amazing and is available 24/7. People are satisfied with this VPN provider because it is fast and easy to use, offering a number of different locations.

There are two negative aspects of Hotspot Shield VPN:

Hopefully, this Hotspot Shield VPN review provided you with valuable insight into this VPN provider. According to user reviews, you’ll have a great experience with this virtual private network offering great privacy features, streaming, torrenting, robust protocols, fast speeds, as well as a variety of server locations. On top of that, Hotspot Shield offers a 45-day money-back guarantee, so don’t think twice before giving this VPN service a try.

Yes, Hotspot Shield has a free version that restricts you to 500MB of bandwidth per day and offers only one simultaneous connection.

Is Hotspot Shield good for torrenting?

Hotspot Shield is great for torrenting, but only if you use one of its paid versions. It allows torrenting on all servers and platforms. It uses P2P file sharing, uTorrent, and BitTorrent on its network.

Yes, it hides your real IP address after you activate it by clicking on the Connect button in the desktop app.