Divorce is a sensitive subject and once upon a time, it used to be a controversial one. However, today, we don’t feel the obligation to stay married to someone who makes us miserable just for social approval.

Instead, recent statistics show us that half of the modern marriages end up in divorce. So, if you’re wondering how Britons handle separations, keep reading our divorce statistics for the UK.

Let’s start with the top 10 statistics we came across. 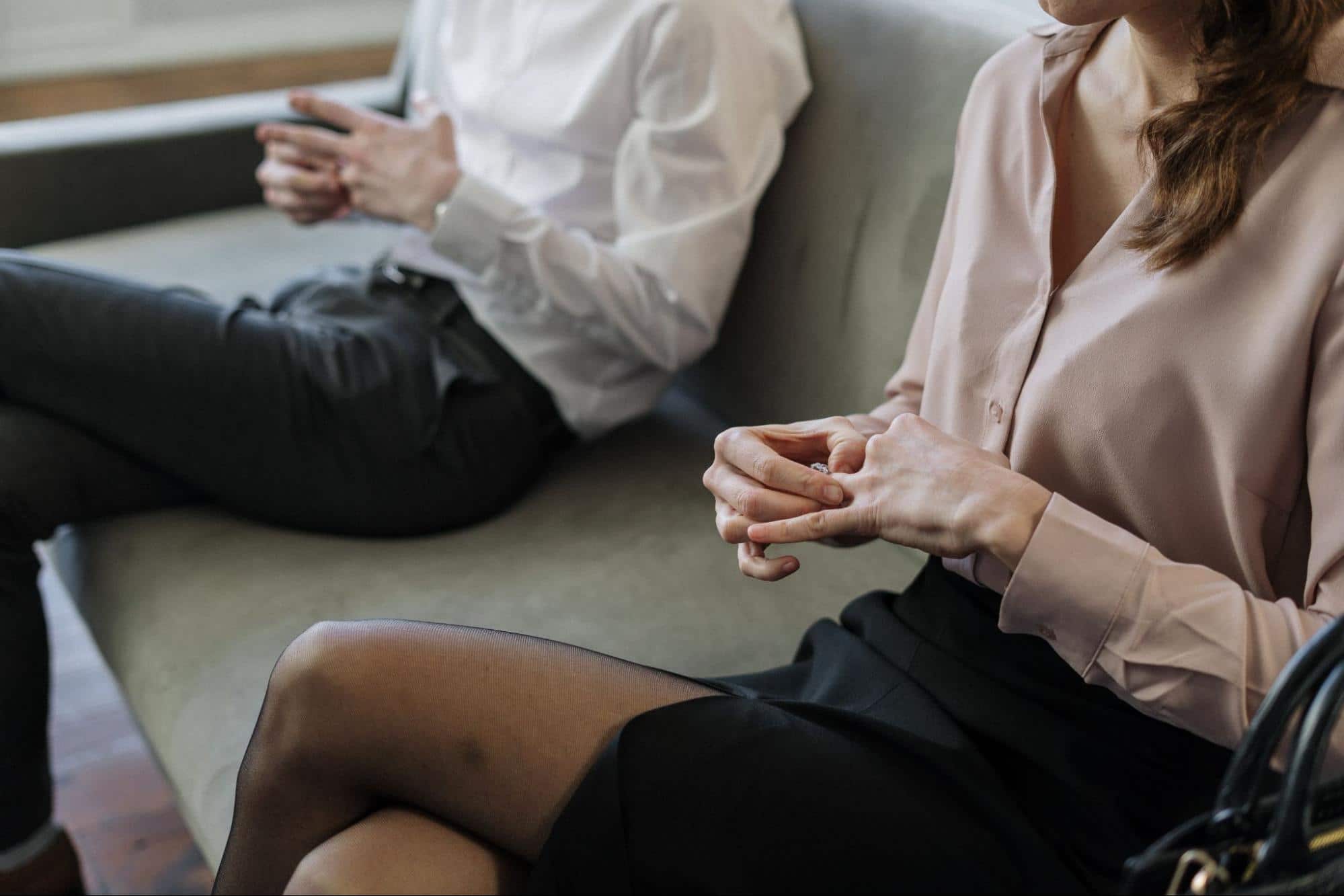 Five Main Reasons For Divorce in the UK

For a couple to get a divorce in the UK, they must have been married for at least 12 months, and their marriage to be legally recognised in the UK. Furthermore, the UK has to be the permanent home of either one or both partners.

The petitioner must provide evidence for one or more of the following five reasons or “facts”, proving that the partners cannot save the marriage.

So, let’s take a look at each of the divorce grounds.

In general, unreasonable behaviour can be defined as anything the court feels is not reasonable or tolerable in a marriage. This can range from physical or emotional abuse to neglect and even financial irresponsibility. So, any behaviour that causes significant distress to one partner can be grounds for divorce.

A separation of two years with the consent of a partner is the second most common reason for divorce, with 27% of the UK marriages ending because of it

If you and your partner have been living separately for at least two years and both agree to end the marriage, you can file for divorce on those grounds. This is generally the easiest way to get a divorce if both parties are in agreement.

Adultery is responsible for 14% of the United Kingdom’s divorces

Adultery or an affair is still one of the main reasons for divorce, although its frequency has decreased recently. To file for divorce on these grounds, you must be able to provide evidence of your partner’s infidelity.

There are some limitations to using adultery as a justification for divorce. If the couple stays living together for six months or longer after the innocent party discovers it, it is not considered a valid reason for separation in court.

Furthermore, adultery is not a valid reason to divorce if the relationship is between two people of the same gender (same-sex marriage cases).

If you and your partner have been living separately for at least five years, you can file for divorce on those grounds, with or without their consent.

This is generally the most challenging way to get a divorce, as it requires a longer time apart and usually means that both parties are not on good terms.

Only 1% of UK marriages end because of desertion

Desertion is when one partner abandons the other without their consent or justifiable reason. In order to file for divorce on these grounds, you must be able to provide evidence that your partner has deserted you for a continuous period of at least two years.

Keep in mind that if you have left the marital home, you cannot file for divorce on the grounds of desertion.

If you’re here, you’re probably wondering how many marriages end in divorce in the UK.

The divorce rate in the United Kingdom is estimated at 42%

However, this number has been steadily declining for the past few years. There are a number of reasons for this decrease, including a rise in the number of couples choosing to cohabit rather than get married.

In 2019, 99% of all UK divorces were between opposite-sex couples, out of which the wife filed nearly two-thirds.

Women applied for the majority of the divorces in the UK, with the main reason being unreasonable behaviour

Luckily, if all goes well with the process, the divorce will be finalised within 4 to 6 months. If both parties agree on the divorce terms, then it is considered uncontested.

An uncontested divorce means no need for a lengthy court battle, which can save a lot of time and money.

It is important to note that you will still need to go through the proper channels and file the necessary paperwork, even in an uncontested divorce.

Uncontested divorces make up the majority of cases in the UK.

For men, the most common reason for divorce is a two-year separation

If you’re wondering does it matter who files for divorce, it does. The spouse filing for divorce is the petitioner, while the other spouse is the respondent.

The petitioner is the one who initiates the divorce proceedings, and as such, they are usually the one who decides when and how to file.

This can be important if you want to file for a no-fault divorce.

A no-fault divorce is when neither party is at fault for the breakdown of the marriage, which can be due to several reasons, such as irreconcilable differences or a lack of communication.

To file for a no-fault divorce, you must have been separated from your spouse for at least six months.

The petitioner bears extra cost on top of the mandatory £592 court fee — they will most likely pay £450-£950 in solicitor fees.

The average marriage duration at the time of divorce for opposite-sex couples is 11.9 years

However, an average marriage in the UK is expected to last around 30 years, which is due to the fact that people are starting to get married at an older age. As such, partners are more likely to have established careers and be financially stable.

Generally, younger people don’t get married that often and are career-oriented, while people in their forties and fifties are experiencing many changes and challenges, such as kids leaving the nest, financial troubles, midlife crises, etc., making them more prone to separation.

Same-sex marriage became legal in the UK in 2013. Since then, there have been a number of same-sex divorces, with the first one being recorded in 2015.

However, civil partnership has been legal in the UK since 2005. A civil partnership is when two people who are not married get together and have the same rights and responsibilities as a married couple, but they cannot get divorced in the same way.

If they want to break the civil partnership, they have to go through a process called dissolution.

In 2019, 916 dissolutions between same-sex civil partnerships were recorded, and female couples were responsible for 54% of them.

The number of same-sex divorces rose drastically, with a 40% increase in one year. Namely, there were 332 more divorces in 2020 compared to 2019.

Another aspect you should consider before filing for divorce is the cost associated with it, which, as you can imagine, is not insignificant.

A UK couple spends an average of £14,561 on legal and lifestyle costs when they end their marriage

Some of the biggest expenses include court fees, which start at £592 and can go up to £1100 for more complex cases.

Another significant expense is hiring a lawyer, which can cost anywhere from £150 to over £500 per hour.

You should also factor in the cost of any property or asset division and alimony payments if you will be required to pay them.

Other expenses associated with getting a divorce include counselling fees, mediation fees, divorce papers and stamps, moving costs, etc.

As you can see, getting a divorce is not a cheap endeavour, so be sure to consider all of these costs before deciding to file.

The £592 is a standard court fee paid for filing a divorce. However, if you need help paying the fee, you may be able to apply for a fee exemption or remittance.

You’ll get a reduced fee if you’re on a low income or one of the following benefits:

If you aren’t on any of the above benefits, you will still be eligible for a reduced fee if you earn £1,170 or less a month before tax if you’re single.

It takes an average of 14.5 months for money issues to be resolved following a divorce in the UK

Resolving financial issues after a divorce can be a long and tiresome process, especially if you are not on good terms with your ex-partner.

One of the best things you can do is try to come to an agreement between yourselves to avoid going to court.

If you cannot reach an agreement, you will have to go through the process of mediation, which can be costly and time-consuming.

Legal fees are the most common divorce cost, encountered by 54% of couples

Divorce is never an easy decision, but sometimes it is the best thing for everyone involved.

If you are considering getting a divorce, be sure to factor in all of the variables, including the cost. While it can be expensive, it is often worth it, in the long run, to start fresh and begin anew.

Hopefully, this Divorce Statistics UK article has helped you better understand the process and what to expect.